Growing out of last year’s the performative interventions; we propose to facilitate a series of food-orientated interventions entitled ‘Cabbages and Kings’. This Surrealistic intervention will take the form of a competition based loosely on TV and Radio panel shows. The title is inspired by Lewis Caroll and the idea by the tradition of ‘king/queen and/or fool for a day’, which informs folkloric celebrations such as the ‘Betsy’ in Molly Dancing (the most well-known folkloric tradition of the Fens), the Spalding Tulip Queens, The Rainbow Summer Solstice Festival (Tydd St Mary) and the Holbeach Food Festival.

The NUGS would like to thank Transported and volunteers Martin & Joan. We would also like to thank the venues who kindly welcomed us into their establishments. Finally to all those who participated in the Cabbages & King games and those who encountered the NUGS during our improvs.

To view images from the Cabbages & Kings events and performances please scroll down the page...thank you. 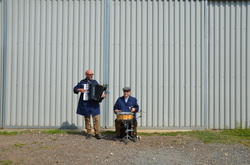